The hype is real after Flash Group, which provides Flash Express e-commerce logistics services, was heralded as the first Thai unicorn following its latest funding round, offering hope for others following in its footsteps.

The mythos of the first Thai unicorn may open the door to future investment, shining a light on the country’s startups, but these entrepreneurs must still prove they have profit potential, a fluency with deep tech and the ability to lure tech workers to the market, according to VC veterans.

Startups that could reach unicorn status in the next few years include Line Man Wongnai, which provides the Line Man food delivery service; Bitkub and Finnomena, which are both fintech startups; and fashion tech startup Pomelo. 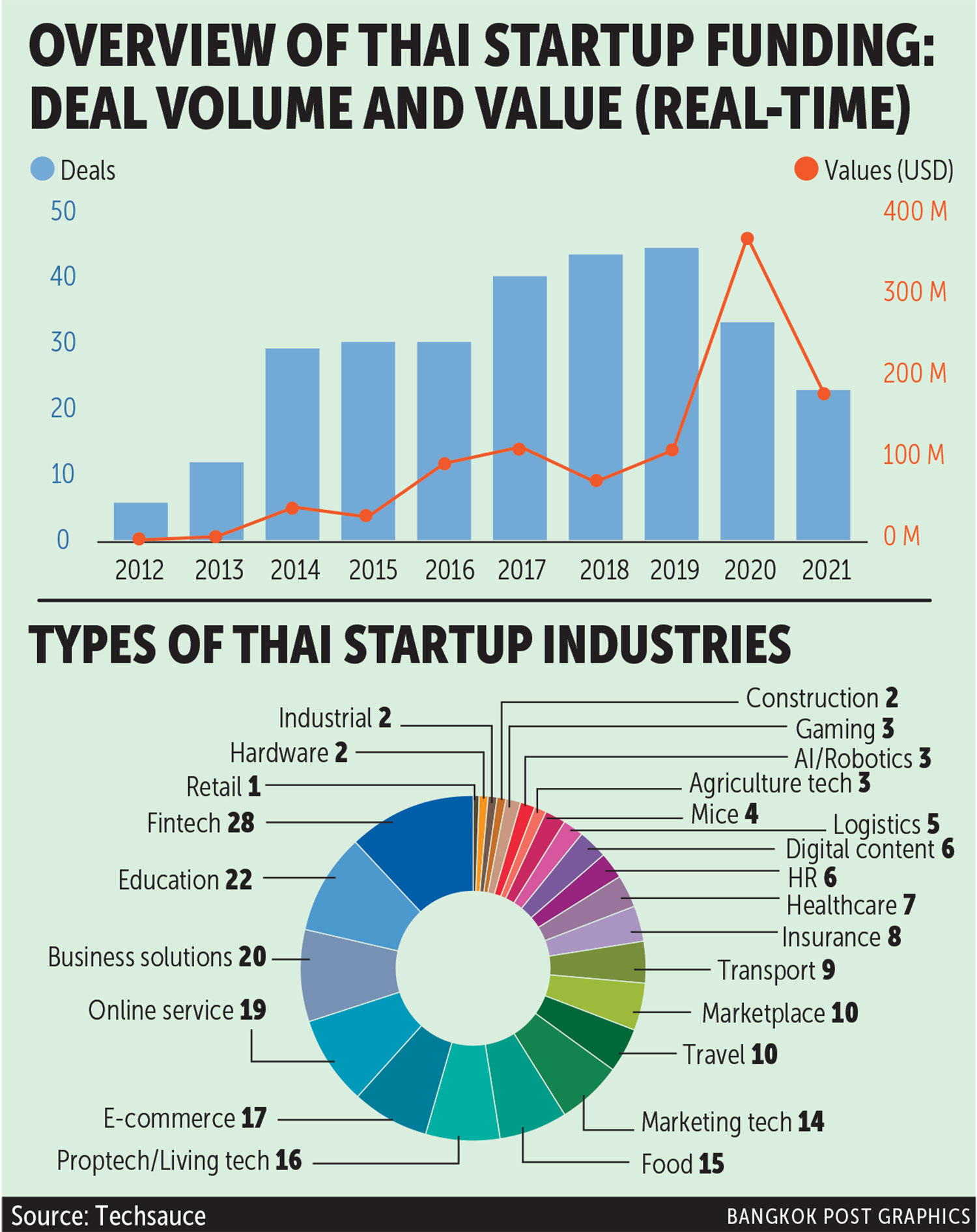 Any startup able to survive or even grow during a pandemic should attract the interest of investors, said Mr Sam.

“We will see more unicorns within 1-2 years as CVCs become more interested in startups,” he said.

“In Thailand, CVCs account for 80% of investment funding for startups and VCs comprise the other 20%. This differs from other countries where the majority of investors are VCs.”

CVCs in Thailand want to work with startups to create synergy with their corporate business.

“Any startups that focus on the domestic market may raise total funding of up to $300 million, as the size of the Thai market is not large enough to justify more,” Mr Sam said.

He said the emergence of local unicorn startups with headquarters in Thailand would benefit the country in terms of tax revenue and employment.

Within the next few years, Bitkub, Finnomena and Line Man Wongnai have the potential to reach unicorn status, while some startups are likely to list on the Market for Alternative Investment, said Mr Sam.

Ruangroj Poonpol, chairman of Kasikorn Business-Technology Group, a subsidiary of Kasikornbank, said Thailand finally producing a unicorn should make it more attractive in the eyes of investors.

Mr Ruangroj, who is also the founder of 500 TukTuks VC fund, believes more unicorns are likely to emerge over the next 2-3 years. He cited Bitkub, Line Man Wongnai and Pomelo as potential unicorns.

Asean’s digital economy is sizeable and continues to grow, said Mr Ruangroj, predicting Thailand could have 10-20 unicorns by 2030.

To support startups, the government should offer matching funds and provide a better smart visa scheme for foreign tech talent, he said. 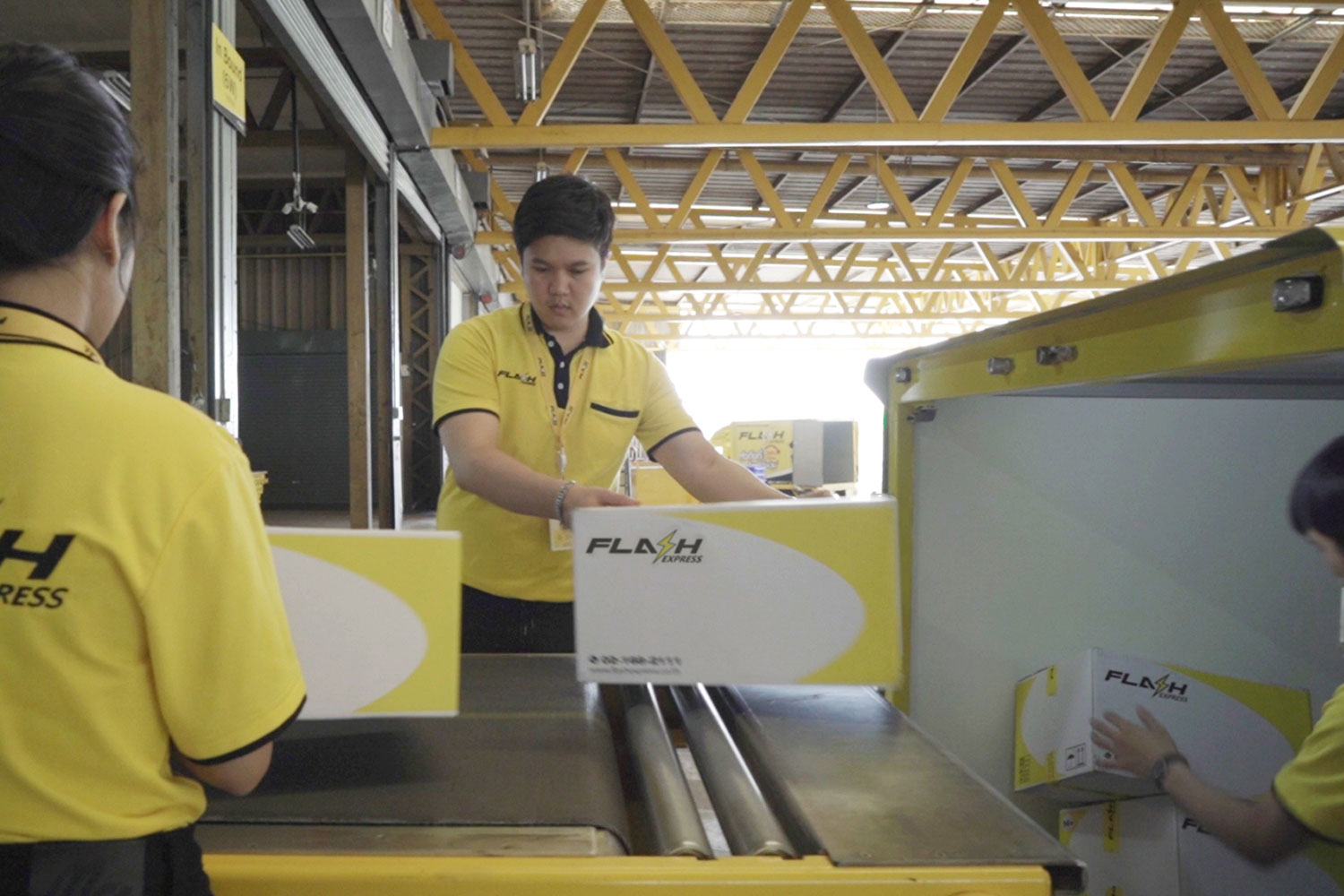 Workers at Flash Express, a full-service provider of delivery and e-commerce in Thailand.

SHOOT FOR THE MOON

Finnomena, a digital wealth management platform for investors and financial advisers, hopes to reach unicorn status within the next few years and has raised $13.5 million in total funding.

The firm was founded by three wealth management veterans and provides financial advice to investors on digital assets via social media channels and podcasts.

Instead of offering its own mutual fund, Finnomena selects the best mutual funds from 19 asset management firm partners to offer investors on the platform.

Jessada Sookdhis, Finnomena Group’s chief executive, said the company has 700,000 total downloads on its investment platforms and expects to reach 1 million this year.

Over 100,000 investors have opened accounts with Finnomena, with more than 50,000 actively trading.

Finnomena reached 300 million baht in assets under advisement (AUA) its first year of operations. The company’s AUA has reached 25 billion baht, which is expected to help Finnomena achieve its target of doubling its growth from 16 billion last year at a faster rate.

“The company is studying the feasibility of innovative investments such as tokenisation of assets to meet investor demand over the next 5-10 years,” he said.

“We may raise funds to reinvest in a new investment platform with a wider range of investors.” 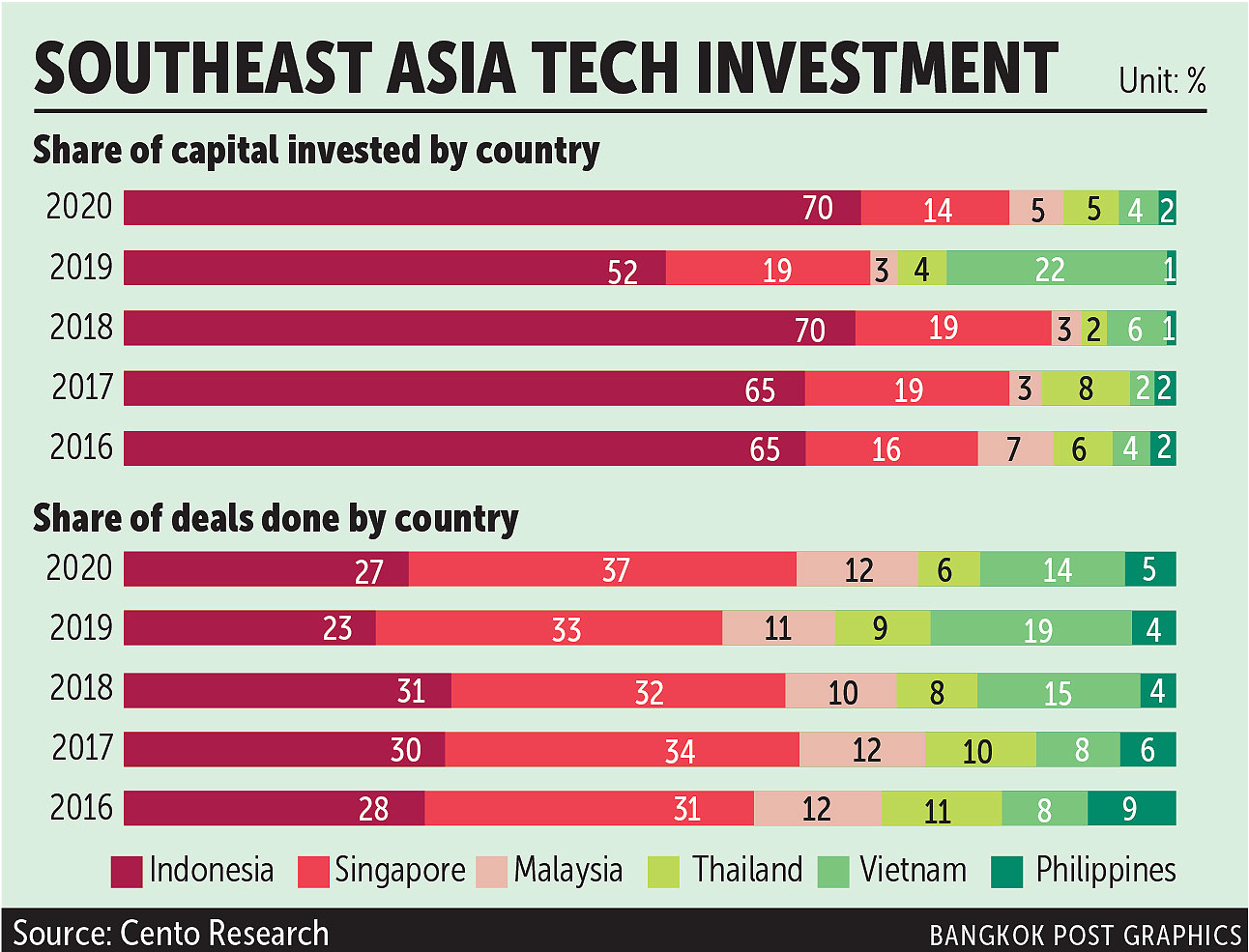 Mr Jirayut said many investors in Thailand are much more willing to invest in startups in the Series A, B and C funding rounds, or in startups that have been operating for a longer time because they are perceived as being less risky.

New startups that need seed funding usually face difficulties raising money because investors in Thailand view them as having a high level of risk, he said.

During the past three years and four months, Bitkub has raised $2.1 million or about 67 million baht from a seed round for its digital asset businesses. The value for those businesses shot up to 525 million baht in the Series A round of funding.

Mr Jirayut said a potential unicorn may be identified by a valuation based on revenue and price-to-earnings (P/E) ratio.

Bitkub generated 1.7 billion baht in revenue for the first five months this year. The company might be considered a unicorn if its P/E reached 20 times or 10 times, should revenue for the remainder of this year keep growing as it did in the first half, he said.

The company’s main challenge lies not in product scaling, but rather human resources, said Mr Jirayut.

The spike in employees requires quite the effort to maintain smooth working processes and organisational culture, while the company struggles to attract workers with skills that are in high demand, he said.

Natavudh Pungcharoenpong, chief executive and co-founder of electronic bookstore platform Ookbee, said his startup is on a path towards unicorn status within 2-3 years.

Ookbee has been open for pre-Series C funding over the past 1-2 months.

“We are in the content business where purchase volume does not mean as much as in logistics or food delivery. That means it will take more time to reach unicorn status,” said Mr Natavudh.

Startups that yearn to become a unicorn need to have a multi-market approach rather than focusing on a single market, he said.

Despite a presence in overseas markets, Ookbee still gains 90% of its revenue from the domestic market, said Mr Natavudh.

He said most local startups are in the seed stage with less than $10 million in value, or in the Series A funding stage with a value of $10-20 million.

Only a few are in the growth stage where their value stands at $100 million, said Mr Natavudh.

“Those in the growth stage will attract investors with sizeable deals,” he said.

“The emergence of a Thai unicorn proves local startups have the ability to grow.”

Komsan Lee, the 29-year-old chief executive of Flash Group, said the success of his three-year-old company happened because it entered the delivery segment when the market was still in the early stages.

He said the government should provide free training and incubation programmes for new entrepreneurs to increase the number of successful startups.

An employee stock option plan, in which employees are granted an ownership stake in the company, should also be supported to attract talent, said Mr Lee.

Visas for tech talent and tax incentives should also be ramped up.

“Regulations need to be friendly enough to attract foreign VCs. As the pandemic rages on, Thailand-based VCs and CVCs are still the main financial sources for startups,” he said.

Yod Chinsupakul, chief executive of Line Man Wongnai, pointed out previously that to become a unicorn, local startups need to have the mindset to grow in a sizeable market.

Line Man Wongnai aims to become a national champion for the food ecosystem by 2023 and wants to launch an initial public offering within 2-3 years, he said.

During the pandemic, with investment lagging behind, startups need to take into account both profit and loss, and not become preoccupied with rapid growth, said Mr Yod.

The government needs to build a startup-friendly environment, including supportive regulations and ensuring fair competition, he said.

“This is a key step to attract investments and enable Thailand to become an innovation hub, luring foreign investment for startups,” he said.

He said to produce more startups, the country may need to become more open to foreigners registering their firms in Thailand, offering tax incentives and easy access to capital.

There should be more regulatory sandboxes to test new technology and business models, such as cryptocurrencies and blockchain, as well as subsidies for the salaries of tech talent in deep-tech startups, he said.

Nuttapon Nimmanphatcharin, president of the Digital Economy Promotion Agency, said the agency, the Comptroller-General’s Department and the Federation of Thai Industries are working together to support government procurement of digital services from local startups.

The government plans to support corporations that buy digital services from startups with a 200% tax deduction of expenses, said Mr Nuttapon.

Foreign firms will be allowed to register as a juristic person in Thailand to provide digital services, even though their physical presence is outside the country, he said.

“Their tax revenue and employment would be a boon for the country,” Mr Nuttapon said.

“We need to think differently, facilitating foreign-owned companies or joint ventures with a Thai partner to operate here in order to draw in technology and talent to the country.”

“We have directly invested in six startups and one fund. Only one startup of the six, HydroNeo GmbH, an aquaculture technology company, is based in Thailand,” said TU’s group strategy director, Patrick Bertalanffy.

Mr Bertalanffy said TU is looking for ways to support startups in its portfolio to enter the Thai market.

The group also wants to contribute to the development of the food tech ecosystem in Thailand.

However, the Thai educational system produces the opposite: 30% of graduates are from STEAM subjects and 70% from social sciences.

“With deep tech, startups can grow in a unique and unbeatable way,” he said.

“Startups also need a proper ecosystem to support their business.”

It is still difficult for local startups to receive funding from foreign VCs, said Mr Somchai.

AIS has engaged with 50 startups to help them thrive, providing marketing consultation, he said.

Pisut Ngamvijitvong, senior director of analysis at Kasikorn Securities, said local startups struggle to find financial support in the country because the domestic VC mechanism is still not mature.

Another stumbling block for startups hoping to receive funding is their lack of pitching ability, said Mr Pisut.

Then once startups reach the growth stage with a high level of profit, which makes them more attractive to investors, many are tempted to sell part or all of their business to others, he said.

Veteran startup investor Kongkiat Opaswongkarn, chief executive at Asia Plus Group Holdings Plc, said the business environment in Thailand is unsupportive of startups in many aspects.

He said the country lacks high-skilled, innovative tech workers, especially computer programmers and engineers, which is a result of the Thai educational system, which focuses on mindless tutoring that encourages students to memorise answers for exams without practicing critical thinking or other necessary skills.

Another problem is the lack of support from the government and related entities, as well as an outdated legal infrastructure, said Mr Kongkiat.

“Thailand gives opportunities to plenty of unskilled labourers, but it is very hard for professionals and experts to shine,” he said.

A final obstacle is the lack of research and technology investments to create intellectual property, said Mr Kongkiat.